Ken Wilson’s love of eclectic local art has led to the purchase of three colossal sculptures currently residing at his wineries in Alexander Valley, Dry Creek Valley, and Sonoma Valley. While he was first introduced to Sonoma County artist Bryan Tedrick’s work through the striking bull sculpture in downtown Cloverdale, Ken really fell in love when Tedrick’s Coyote sculpture, first debuted at the 2013 Burning Man festival, was installed along the Geyserville Sculpture Trail. Ken later purchased the Coyote which now reigns over Dry Creek Valley at the front of Wilson Winery.

In 2016, Ken purchased another of Tedrick’s pieces, dubbed “Lord Snort” – a giant wild boar, which had also debuted at Burning Man; it now lives at Soda Rock Winery in Alexander Valley, its sturdy construction having survived the 2019 Kincade fires. Drawn to Tedrick’s art for many reasons, Ken is most engaged by Tedrick’s fondness for both large scale and fine detail—the way his use of steel and various materials provides definition down to the sinewy detail of muscle structure. The latest addition to Ken’s sculpture collection was commissioned directly from Tedrick – a ferocious grizzly bear standing on its hind legs with a swiveling head – and features recycled steel recovered from the burned down structure of Soda Rock Winery’s former tasting room. 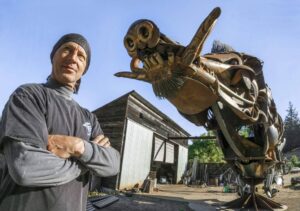 Renowned Glen Ellen artist Bryan Tedrick specializes in large scale kinetic metalwork, and recognizes the compulsion to interact with his pieces, which are created with the intention of allowing viewers to touch and climb. Tedrick’s sculptures are meant to work in harmony with their environment, and can be seen in many locations around Sonoma County and beyond, including “Victory” at the Geyserville Sculpture Trail, “Valley of the Moon” in Oakmont, “Bucephalus” in Santa Rosa, and more. View Tedrick’s portfolio here.

“There are precious moments when the mind is quiet and I can enjoy my senses without interference. Sculpting, at its best, includes such moments. Balancing space, mass, texture, color, line, pattern, weight, and proportion is a visual pleasure. Harmony is something I feel; analysis is secondary.

While I may have a general idea in mind when creating a sculpture, the passages that constitute the whole are a surprise to me. Any durable material is fair game in this process, although steel is usually best for actual connections between mediums. I grab elements that are near at hand, realizing that chance and spontaneity are keys to accessing fresh visual territory. This maundering exploration often involves stumbling corrections and meandering whimsy, but eventually concludes with a satisfying map of the journey.

There is no substitute for handmade objects; emotions and character are embedded in the work. Art is a vehicle of expression, a means of encoding our response to the world. I hope my audience appreciates my serious folly, my love of nature and beauty, and enjoys my effort to flirt with the mystery of life.” 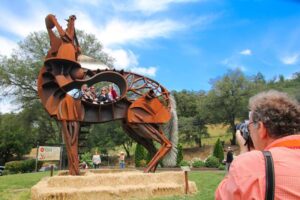 THE COYOTE at Wilson Winery

A howling coyote sculpture originally commissioned by and debuted at the Burning Man 2013 festival now resides beside Wilson Winery in Dry Creek Valley.

“My conception of Coyote was simply to make an animal that would fit in the context of the desert at Black Rock (Burning Man). Coyote’s character also seems a good metaphor for freedom, love of wild spaces, and the tenacity to remain. The empty stomach is representative of the drive to survive and the propelling force of life on earth. Playful and pack-loving, Coyote howls for companionship and the love of the hunt.”

Click here to watch a short video on the design and creation of the of Coyote. 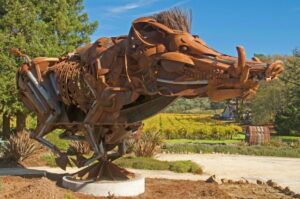 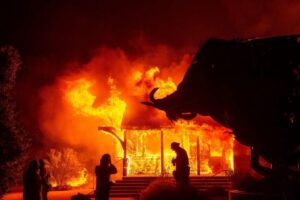 Soda Rock Winery’s mascot “Lord Snort” came to its Alexander Valley location in November of 2016 after its debut at Burning Man. Lord Snort became the iconic image of the 2019 Kincade Fire as its hearty steel construction survived the firestorm while the tasting room – excepting the original stone wall – did not. Today, the sculpture remains beside the surviving barn (now converted into a tasting room) as a symbol of resilience and strength for Sonoma County.

In 2019, Ken Wilson commissioned a third sculpture from Tedrick. The 28’ tall grizzly bear will made its home in Sonoma Valley–the location of the Bear Flag Revolt of 1846, with the grizzly bear itself a symbolic icon of both Sonoma Valley and California.

Fabricated in steel, the 15-ton bear sculpture was installed at St. Anne’s Crossing Winery in Kenwood in January of 2022, taking its place among the largest sculptures in Sonoma County. In development for over 30 months, the bear resides just down the road from Tedrick’s Glen Ellen studio. The sculpture is endowed with even greater meaning for Ken Wilson, as it incorporates recycled steel from his Soda Rock Winery Tasting Room which burned down in the 2019 Kincade Fire.

“Doing a bear was Ken’s inspiration, my task was to bring it to life. The attitude he asked for was ferocious, and thus the pose. I incorporated some used steel recycled from local sources such as water pipes from Sobre Vista (the fur), light standards from the city of Sonoma (hands and feet), conveyor belt chain from the sawmill in Cloverdale (neck area), and beams from the charred remains of Soda Rock Winery (lower leg).

Interpretation of this bear, its meaning, is really as varied as the viewers. The Bear, to me, is a reminder of the wildlife that surrounds us and the will to survive. I am grateful to have been able to create this powerful sculpture and share it locally! My studio is only a few miles away and I have been able to work there for over 25 years thanks to the Gordenker Family”.